With construction having commenced in respect to Phase 1 (London to Birmingham) following Royal Assent in 2017, and Royal Assent being granted earlier this year for Phase 2a (Birmingham to Crewe) in 2020, the Government responded to the Oakervee Review confirming its commitment to the delivery of High Speed 2 in its entirety.  Accordingly, it sought to prepare an Integrated Rail Plan (IRP) for the North and Midlands which would set out the form, scope and phasing of Phase 2b along with Northern Powerhouse Rail and the Midlands Rail Hub.  Whilst the development of the Western Leg would continue to evolve the Government said that the Eastern Leg would be subject to further review and considered in light of the findings of the IRP.

Finally, last week we saw the publication of the much-awaited IRP so what does this mean for the delivery of High Speed 2 and in particular Phase 2b? 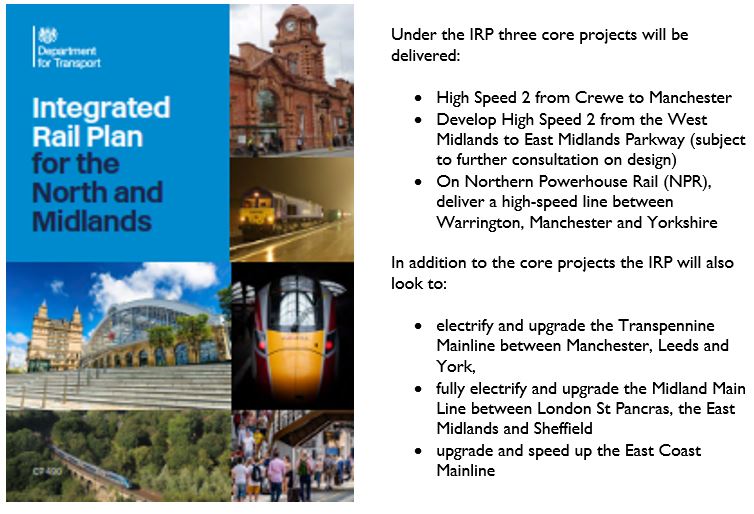 Whilst the IRP retains Phase 2b as two separate elements, the Western and Eastern Legs. delivery of Phase 2b will no longer proceed as a single project in a single Hybrid Bill.  Consequently, HS2 Limited will continue with the Hybrid Bill for the Western Leg which is expected to be submitted to Parliament next year, followed by a second Bill for the revised Eastern Leg at some point in the future.  The reasons for the revised proposals in the IRP are due to cost increases on the overall project which has meant that funding the current proposals would limit the opportunity for other important investment.  In addition, capacity and connectivity improvements identified would not be realised until the early 2040s if the line was to be built in one go.  As a result, the electrification of the Transpennine Mainline, Midland Mainline and the East Coast Mainline are seen as alternatives which would still deliver the anticipated outputs and travel times that the original High Speed 2 project would, but at a reduced cost and shorter time frame.

So how will High Speed 2 Phase 2b look now?

The Government are committed to completing the line to Manchester and proposes to proceed with Phase 2B as planned.  The proposal still includes a HS2 Stations at Manchester Airport and Manchester Piccadilly which is to be designed for future use by the NPR.  The Government continues to consider that the design of the Western Leg should also include Crewe Northern Connection so that trains can call at Crewe and re-join the HS2 line.

Initially planned to run from the West Midlands to an East Midlands Hub Station at Toton, trains would continue North serving Chesterfield and Sheffield via a spur to the Midland Main Line or continue on a new high-speed line to Leeds with a spur to the East Coast Main Line to serve York and onto Newcastle.  The IRP now clarifies matters in respect to the Eastern Leg.

A new high-speed line from the West Midlands to East Midlands Parkway will be delivered, largely based on the existing safeguarded route but designed to allow trains to reach existing stations in Nottingham and Derby and capable of future extension.  Rather than develop a new high-speed line to Sheffield and Leeds, investment and upgrading of the Midland Mainline and East Coast Mainline is aimed to deliver the benefits of such a high speed route sooner.

So what are the implications of the IRP on those affected by High Speed 2 on the Eastern Leg?

Whilst the development and delivery of the Western Leg will continue, it is expected that the next Hybrid Bill to be introduced will be for the development of the high-speed line between the West Midlands and East Midlands.

However, the Government believes a wider range of options need to be considered, including looking at options on how to take HS2 trains to Leeds.  Consequently, the Government does not intend to lift the safeguarding directions on the previously proposed HS2 route, albeit will be kept under review and updated to reflect latest route designs.

As a result, land and property owners will continue to be impacted by High Speed 2, even though the revised high-speed route will only link the West Midlands with the East Midlands.  This will mean continued uncertainty until such time as safeguarding is lifted.  Accordingly, those eligible will still be able to access the full range of property schemes that are currently available across the route, including the full route of the Eastern Leg.